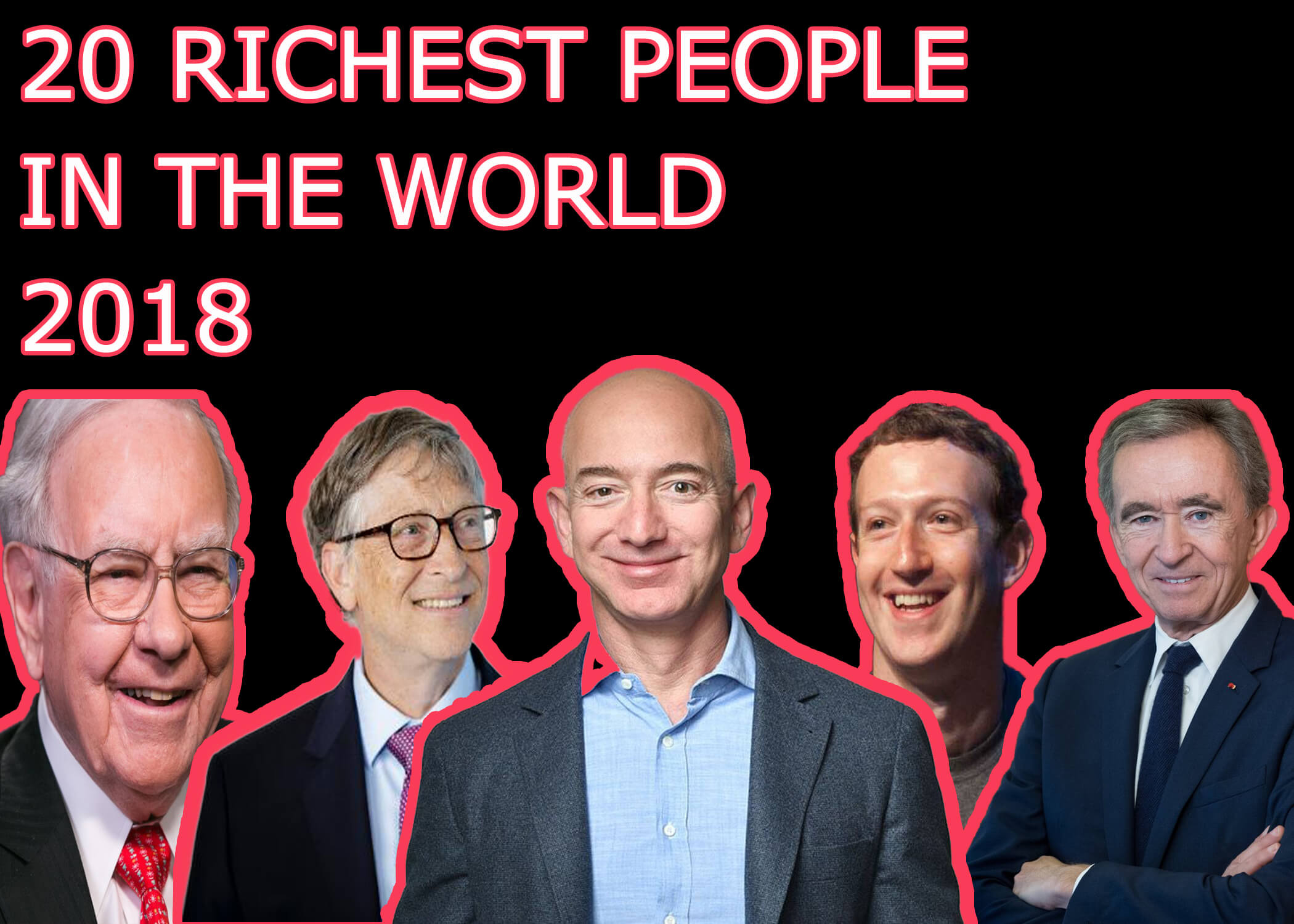 Who is the Richest Person in the World?

Some people may know the richest person, or first 5 in the list, or even 10 but in this article we'll show you the list of top 20 richest person in the world, real-time stats from forbes.

Here's the list of 20 Richest People in the World: Jack Ma Yun is a Chinese business magnate, investor, and philanthropist. He is the co-founder and executive chairman of the Alibaba Group, a multinational technology conglomerate. Its 2014 IPO in New York set a record as the world's biggest public stock offering, raising $25 billion. Being rejected from Harvard, KFC and other 30 different jobs before founding one of the most valuable company in the world, He is definitely a inspiration of many young entrepreneurs. Steven Anthony Ballmer is an American businessman and investor who was the chief executive officer of Microsoft from January 2000 to February 2014, and is the current owner of the Los Angeles Clippers of the National Basketball Association (NBA), which he bought in same year when he retired from Microsoft. Mukesh Dhirubhai Ambani is an Indian business magnate, chairman, managing director, and the largest shareholder of Reliance Industries Limited. Reliance was founded by his late father Dhirubhai Ambani, a yarn trader, in 1966 as a small textile manufacturer. In 2016, Reliance sparked a price war in India's hyper-competitive telecom market with the launch of 4G phone service Jio. Samuel Robson "Rob" Walton is an American businessman and is the eldest son of Sam Walton, the founder of World's largest retailer, Walmart. He ran the retailer for nearly 25 years; he first took over as chairman upon his father's death in 1992. He and other heirs of Sam Walton collectively own about half of Walmart's stock. Alice Louise Walton is the only daughter of Walmart founder Sam Walton. She has focused on curating art, rather than working for Walmart like her siblings, Rob and Jim. Her personal art collection is valued in the hundreds of millions of dollars. James Carr Walton is the youngest son of Sam Walton, and runs the family's Arvest Bank, which boasts assets of more than $16 billion. He sat on Walmart's board for more than a decade before yielding the seat to his son, Steuart, in June 2016. Michael Rubens Bloomberg is an American businessman, politician, author, and philanthropist, cofounded financial information and media company Bloomberg LP in 1981. After putting down the company's seed funding, he has retained an 88% stake in the business, which has revenue north of $9 billion. he has donated more than $5 billion to gun control, climate change and other causes. He owns at least six homes, including ones in Bermuda and London. Sergey Mikhaylovich Brin is an American computer scientist and internet entrepreneur. Together with Larry Page, he co-founded Google in 1998, and now works as president of tech giant Alphabet, the parent firm of Google. Google went public in 2004 and changed its name to Alphabet in 2015. Lawrence Edward Page is an American computer scientist and Internet entrepreneur who co-founded Google with Sergey Brin. With Brin, he also invented Google's PageRank algorithm, which powers the search engine. He is the Google's first CEO until 2001. After serving as president of products, he took the CEO job again in 2011. Mark Elliot Zuckerberg is an American technology entrepreneur and philanthropist. He is known for co-founding and leading Facebook as its chairman and chief executive officer. He has seen his net worth soar as the social network's stock price has skyrocketed. He started Facebook at Harvard in 2004 at the age of 19 for students to match names with faces in class, he tool facebook public in May 2012 and still owns nearly 17% of the stock. Also In December 2015, he and his wife, Priscilla Chan, pledged to give away 99% of their Facebook stake over their lifetimes . David Hamilton Koch is an American businessman, philanthropist, political activist, and chemical engineer. He joined the family business Koch Industries, the second-largest privately held company in the United States, in 1970. He stepped down from his role as executive vice president in July 2018, citing health concerns. Koch Industries, which has revenues of $100 billion, operates pipelines, produces fertilizer and makes Dixie cups and Quilted Northern toilet paper. Charles de Ganahl Koch has been chairman and CEO of Koch Industries, America's second largest private company, since 1967. The conglomerate has some $100 billion in revenues from businesses including pipelines, chemicals, Dixie cups, and Stainmaster carpets. His father, Fred Koch, started the business in 1940 and improved a method of refining heavy oil into gasoline. The Kansas native owns a 42% stake in the firm, as does his brother, David; they bought their two other brothers' shares in 1983. Lawrence Joseph Ellison is an American businessman, entrepreneur, and philanthropist who is co-founder, executive chairman and chief technology officer of Oracle Corporation. He gave up the Oracle CEO role in 2014 but still serves as chairman of the board and chief technology officer. it acquired cloud-software firm Netsuite for $9.3 billion in 2016. He also pledged $200 million to the University of Southern California for a cancer treatment center. Amancio Ortega Gaona is a Spanish billionaire businessman and one of the richest men in Europe and the wealthiest retailer in the world. he cofounded Inditex, known for its Zara fashion chain, with his ex-wife Rosalia Mera in 1975. He owns about 60% of Madrid-listed Inditex, which has 8 brands, including Massimo Dutti and Pull & Bear, and 7,500 stores around the world. Bernard Jean Etienne Arnault is a French business magnate, an investor, and art collector. Arnault is the chairman and chief executive officer of LVMH, the world's largest luxury-goods company. Bernard Arnault oversees an empire of 70 brands including Louis Vuitton and Sephora. Record results at LVMH and a megadeal to buy out nearly all of Christian Dior helped boost Arnault's fortune by $30.5 billion in one year. Warren Edward Buffett is an American business magnate, speaker, philanthropist and most successful investor of all time, who serves as the chairman and CEO of Berkshire Hathaway, which is one of the most valued company on stock market with most expensive stock price in world. he first bought stock at age 11 and first filed taxes at age 13. He's promised to give away over 99% of his fortune. So far he's donated $35 billion, much of it to the foundation of friends Bill and Melinda Gates. Bill Gates is an American business magnate, investor, author, philanthropist, humanitarian, and founder of Microsoft Corporation. During his career at Microsoft, Gates held the positions of chairman, CEO and chief software architect, while also being the largest individual shareholder until May 2014. With his wife Melinda, Bill Gates chairs the Bill & Melinda Gates Foundation, the world's largest private charitable foundation. To date, Gates has donated $35.8 billion worth of Microsoft stock to the Gates Foundation. Jeffrey Preston Bezos is an American technology entrepreneur, investor, and philanthropist and founder, chairman, and chief executive officer of Amazon. According to Forbes, He is the first person with a net worth surpassing $150 billion in the 3 decades that Forbes has tracked the richest Americans. He owns 16% of e-commerce colossus Amazon, which he founded in a garage in Seattle in 1994. He purchased The Washington Post in 2013 for $250 million, His other passion is space travel: His aerospace company, Blue Origin, is developing a reusable rocket that He says will carry passengers.